Well, to put it bluntly– yes. Yes, your rates are probably going to go up after an accident. I know — you don’t want to hear that, but it’s true. Anyone who tells you differently is either afraid to tell you the truth, or doesn’t know what they’re talking about.

To understand why rates go up after an accident or claim, you first need to have at least a general understanding of how insurance companies determine their rates to begin with. Trust me, it’s not as cut and dry as you think.

There are multiple layers and variables that go into an insurance rate and different insurance carriers can weigh those variables differently when establishing their pricing.

Clients ask me this question all the time, and as much as it frustrates me sometimes, honestly, I can understand where the insurance company is coming from.

Insurance companies set their price based on a very particular set of facts, risks, and other circumstances at a given moment (when you initially apply for insurance)–loss history being a major one (along with credit).

Once that set of circumstances or risks changes for the worse, is it not fair that the price can change too?

I bet if they had accidents in their past, you’d be more cautious about letting them rent your car. You would almost certainly want to charge them more to rent it right? And if you rented it to them and they crashed it, you would probably want to charge them double the next time (if there is a next time) because now the level of risk has increased.

That’s basically what insurance companies do. They legally represent strangers.

All of the risk is on them. The only thing they can set their rate off of is this set of facts and circumstances, because they don’t know much else about you. That’s the brutal truth about the situation.

So how much will my rates go up? This depends on several things. Insurance companies generally have certain thresholds that will trigger a surcharge.

For example: if you get into an auto accident and your insurance carrier pays out more than a certain amount (in this example we’ll use $1,450) they can by terms of the policy, surcharge your policy.

Take a close look at your policy, it will tell you exactly what that threshold is, and also other information about rate penalties, so make sure you take a hard look at that.

It also depends on what else you have on your loss history.

If it was your first accident or claim in a while, the insurance carrier may take it easy on you, but if you’ve had multiple claims in a short period of time (1-3 years), you can expect an increase, and possibly a big one.

The problem with this is, you could end up being stuck with that insurance company.

A person’s knee jerk reaction when their rate increases is to shop around and try to change carriers to obtain a better rate. That’s not guaranteed to work though, because now, you have a “history” of losses that other insurance companies can see, and use to determine your rates too.

In other words, you can run, but you can’t hide!

As mentioned earlier, many things go into a rate but one of the most common reasons your rate might go up after an accident is that if you are accident/claim free when you start with a new company, you will get a “loss-free” discount.

If you get into an accident or file a claim, the first thing that happens is that discount will disappear when your policy renews, so your premium won’t be as low as it was before the claim. It’s not necessarily that the insurance carrier is increasing your rate, but that your losing a discount that was keeping the rate lower. Make sense?

Either way, the rate goes up, but it’s nice to understand exactly what is triggering the increase.

It’s also important to know about your loss history reports. This is huge!

For auto insurance there are two different reports–CLUE and MVR. The CLUE report shows any type of accidents and/or damage claims. The MVR shows any moving violations like speeding tickets or red light infractions.

Ideally you want these reports to be as clean as possible because anything that’s one either one, even if the accident was not your fault, is going to show up, and will almost always change the rate.

These reports function almost exactly like a credit report would. Any little thing that shows up on the report can alter your credit score, or in this case your insurance premium(s), so you have to keep it as “clean” as possible!

I counsel people all the time, that if the accident wasn’t your fault, try submitting the claim through the at-fault party’s insurance company if possible. Most of the time people get inpatient or afraid, and contact their own company to initiate repairs, not knowing that eventually it can effect their future rates, even if it wasn’t their fault.

What about accident forgiveness? 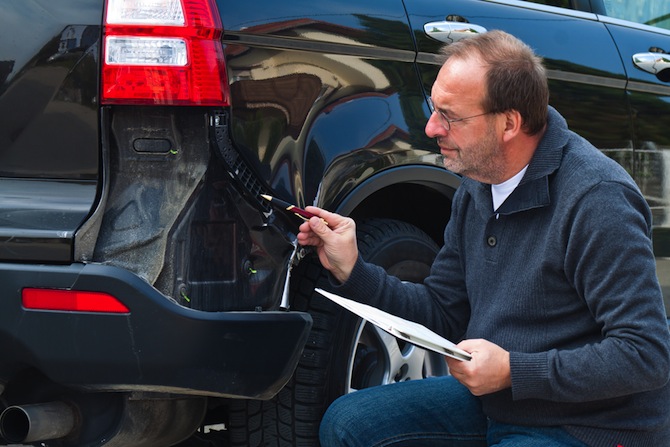 Of course, there is this thing called “accident forgiveness” which many insurance companies have made you believe is some free feature that they just give you out of the kindness of their heart. What many people don’t know is that it’s not free.

You have to pay extra for accident forgiveness (if you want it ahead of time).

If you have accident forgiveness, you are basically pre-paying your rate increase ahead of time.

I bet you never thought of it that way have you?

What happens if you don’t get into an accident though? You have handed over extra cash for no reason. You could say the same thing about insurance in general, and it’s true that the cost for accident forgiveness coverage isn’t substantial, but over time, just like anything else, it adds up, and if you’re not using, it’s wasteful.

If however you don’t purchase accident forgiveness up front, you can still get it for free if you’re a good driver. Most insurance carriers will automatically forgive your first loss if you’ve been claims-free for 3-5 consecutive years prior to your claim. That time frame depends on the company, but it is specified in your policy if you want to take a look.

So how do you avoid your rates going up? It’s simple: be more careful driving.

Keep your loss history reports as clean as possible. Don’t file small claims–that’s not the point of insurance anyway.

It’s one thing if you total a car, or lightning hits your house, but if a piece of siding blows off your house, or you chip your windshield, you may want to think twice before calling your insurance company.

I’d love to hear your thoughts if you have any questions or comments so be sure to leave them below in the comment section!

Hi there! I'm Chris, your trusted local agent! Thanks so much for the opportunity to quote your insurance! Take a look at the video above, as I walk through your custom proposal.

This is "Agent Info" box that you can edit from your profile page. Super simple to give your customer a description or bio about yourself!

This box will appear on all QuoteVids by default, but you can override it with custom content on a page-by-page basis :)

Previous Post: Will my car and home insurance rates decrease if my credit improves?